The Best Beaches in Lagos

Lagos beaches guide with the most recommended and most beautiful beaches 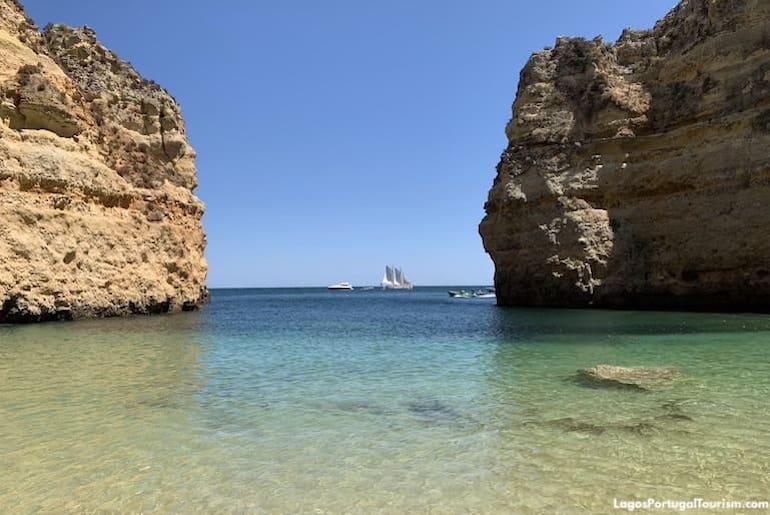 Lagos has some of the most beautiful beaches in Portugal (and certainly also in all of Europe!). They illustrate travel brochures and are among the most shared images of the country on social media. Ranging from small coves to long stretches of sand, most are within walking distance of the center. Below is a list of the “official” beaches in the city -- you’ll find others on coves only accessible by boat (take a look at the available tours).

It’s recommended that you walk over the cliffs from Praia do Pinhão to Ponta da Piedade. It takes about 30 minutes, but you'll take a little longer, as you'll inevitably stop several times to photograph the breathtaking views. Those over Praia do Camilo and Praia da Dona Ana are especially spectacular. From Ponta da Piedade you can also walk all the way to Praia de Porto de Mós. If you don’t want to walk to the beaches away from the center, you can take a bus. Number 2 goes past the beaches from Meia Praia to Porto de Mós, while number 4 stops in Praia da Luz.

There are beaches for everyone, including families, surfers, seniors, the disabled, naturists, and the gay community. Temperatures are usually warm enough for sunbathing from May to early October, but late June and early September offer the best beach days. That’s because many of the central beaches can be crowded in hot July and August. Surprisingly, the water is cold throughout most of the year. You must remember that this is the Atlantic, not the Mediterranean. 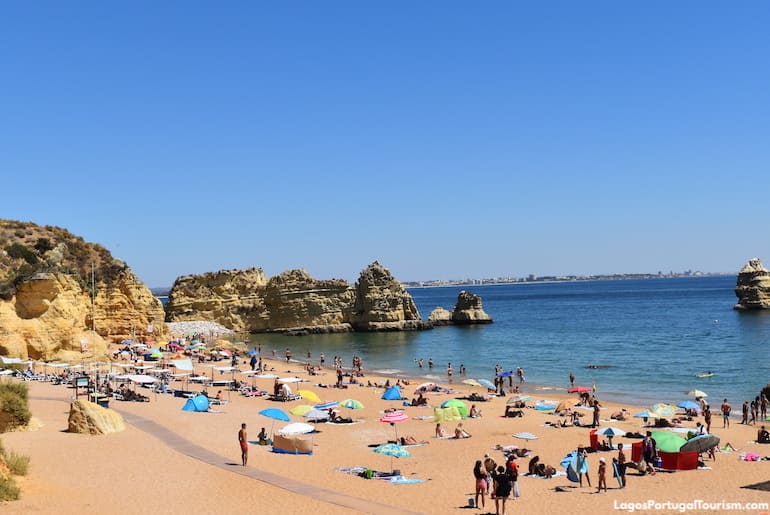 It’s one of Algarve’s most famous beaches and the reason is its spectacular ochre cliffs. They offer shelter from the winds and stunning views from the top. It’s about a 15-minute walk from the Old Town, but can also be reached by bus.

Where to Stay: Carvi Beach Hotel 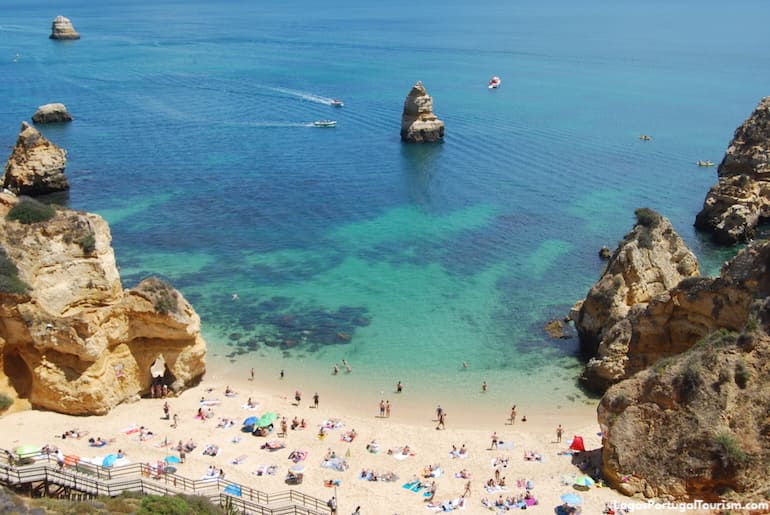 This beach is reached via a staircase where everyone takes selfies. There’s a perfect view over the different rock formations and the usually calm and crystal-clear water. It’s the beach for snorkeling, but not for relaxation -- it’s often packed in the summer. Still, no visit to Lagos is complete without seeing this breathtaking beach, even if just to photograph and enjoy the view. It’s about a 20-minute walk from the center of town.

Where to Stay: Cascade Wellness Resort

See the Praia do Camilo Guide. 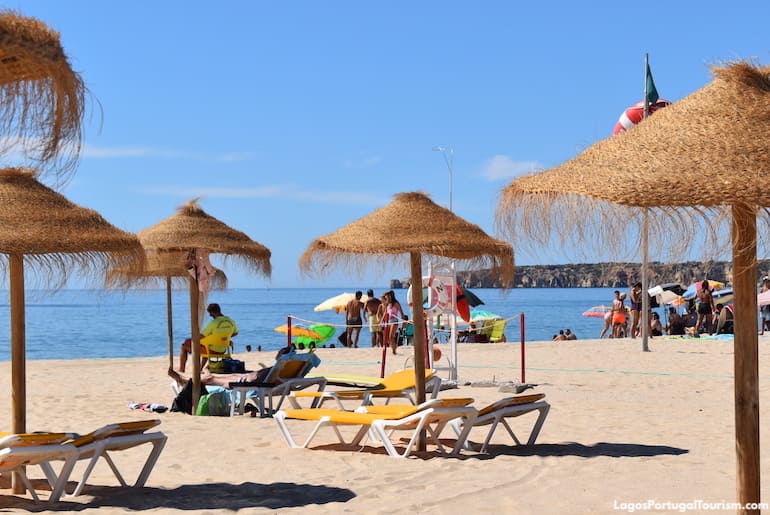 Lagos' largest beach stretches for over 4km (2.5 miles). Backed by dunes, it offers space for everyone, even in the high season. Although it doesn’t have the towering cliffs and rock formations of the other beaches in town, it stands out for being accessible to the disabled, for being suitable for watersports, and for nearly-deserted spots where some end up sunbathing nude. It’s located a short walk from the train station, but if you’re driving, there’s plenty of parking.

Where to Stay: Iberostar Selection Lagos 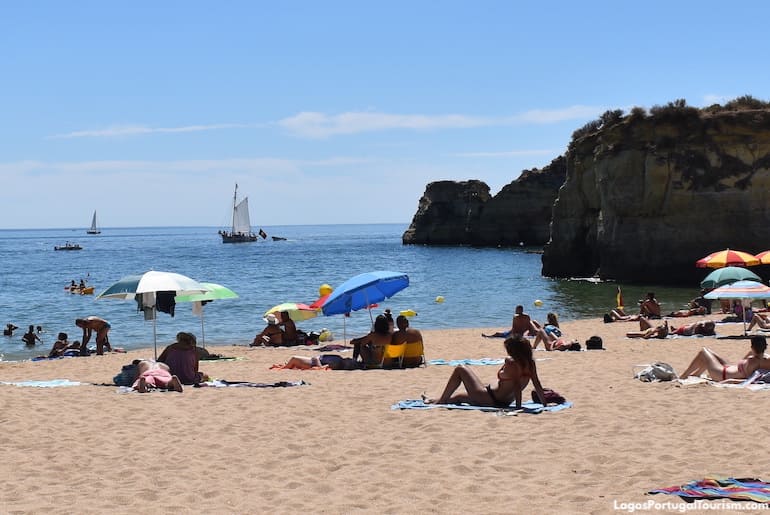 This small beach is next to the 17th-century fort right in the center of town. Many of the kayak tours around the coast depart from here, and it’s usually crowded. The cliffs shelter it from the wind and separate it from the neighboring Praia dos Estudantes, but a tunnel connects the two.

Where to Stay: Lagos Avenida Hotel 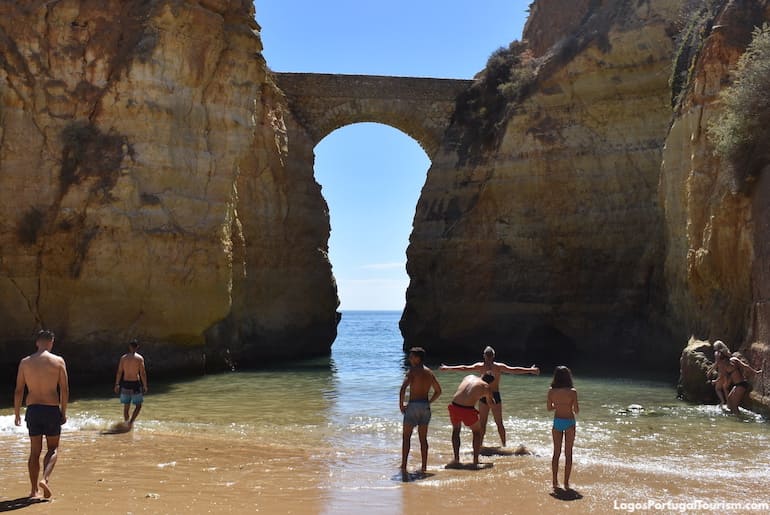 It’s a small beach but its central location and iconic arch has made it one of Lagos’ most famous. Everyone poses by the arch, while others try to find space to spread their towel, as it’s usually crowded in the summer. 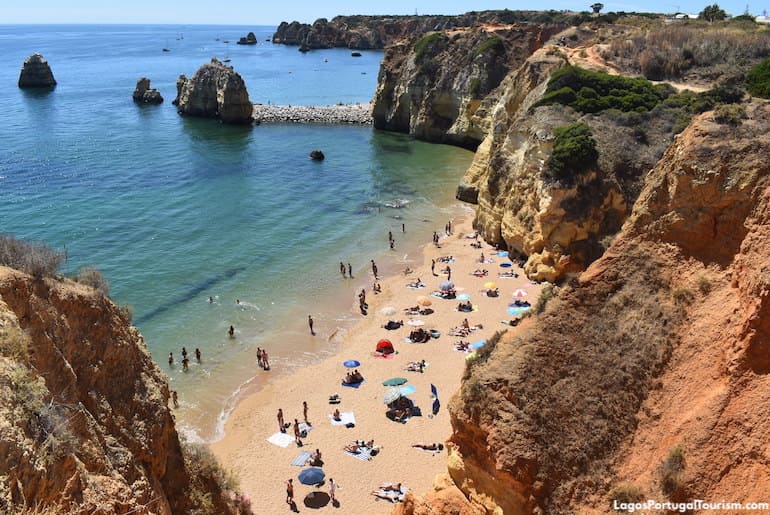 Cliffs separate this beach from Praia dos Estudantes to the east and Praia da Dona Ana to the west. A long staircase leads to the sand, offering views along the way.

See the Praia do Pinhão Guide. 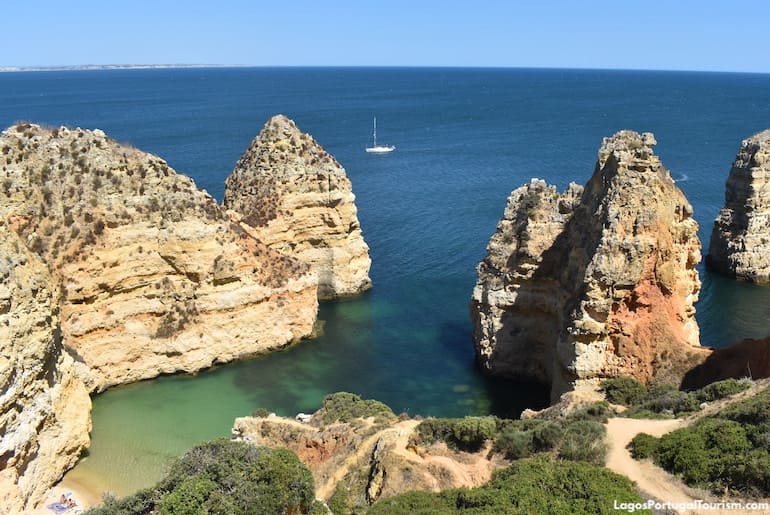 This stunning beach is Lagos’ best-kept secret. Although it’s located roughly halfway between the town’s most popular tourist attraction (Ponta da Piedade) and the famous Praia do Camilo beach, it’s hidden down a cliff and there’s nothing pointing in its direction. Its extraordinary beauty is worth the effort of hiking down to the sand. Its waters are usually calm, and it’s sheltered from the wind. The wild atmosphere attracts naturists, so it’s an unofficial nude beach.

Where to Stay: Villas D. Dinis 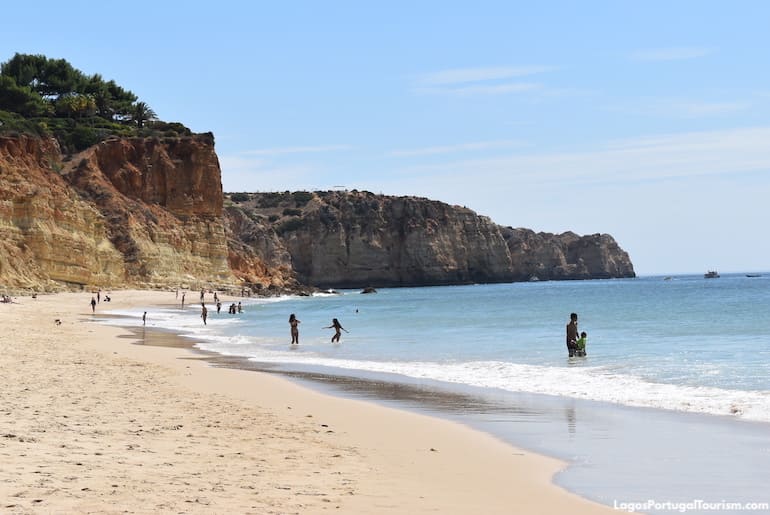 It’s located outside the center, so this sandy beach has more locals than tourists. Many of them are surfers, as this is where you’re more likely to have the best waves. It’s Lagos’ second-largest beach, stretching for over one kilometer and guaranteeing enough space, even in July and August. You need to walk for about a half hour from central Lagos to reach it, or to take a bus. If you’re driving, you may park at the large parking lot. 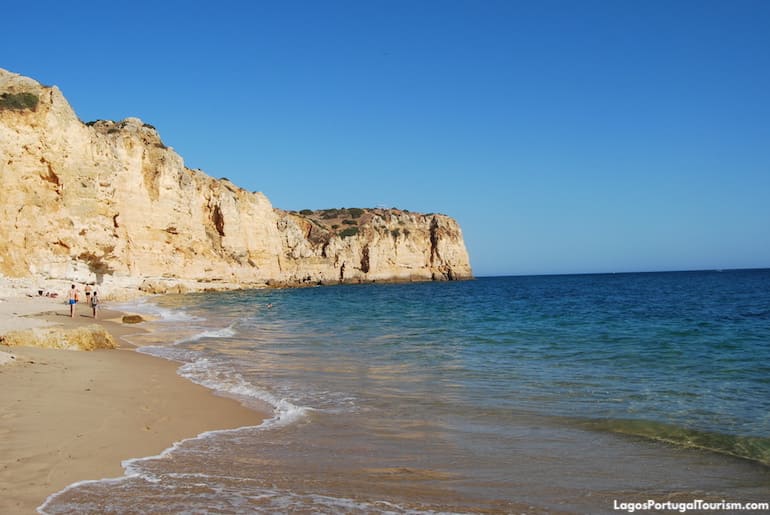 Once a “secret” beach, it has become more popular but still requires some effort to find it. Because it’s rather difficult to reach, it mostly attracts young people and is an unofficial nude and LGBT-friendly beach.

Where to Stay: Canavial I & II Apartamentos

See the Praia do Canavial Guide. 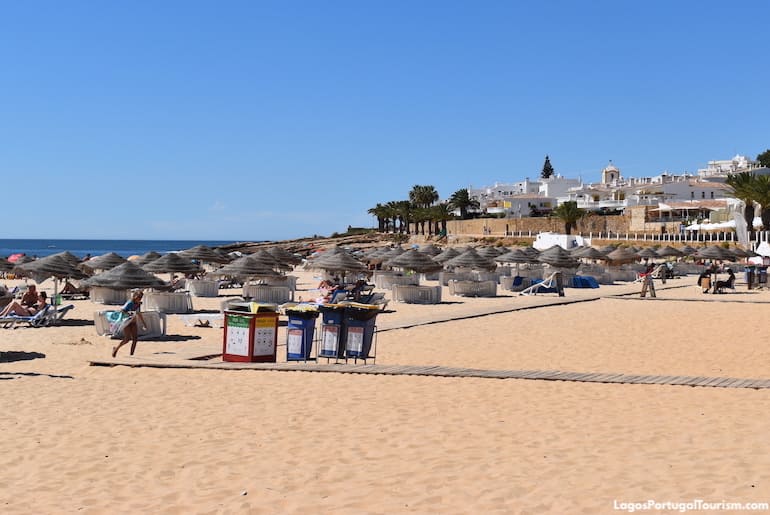 The village of Luz is right outside Lagos, so it has also become a popular holiday destination, especially for families. Part of the beach is overlooked by the white buildings of the village, and another by a tall cliff. There are parasols and loungers for rent in the summer, and plenty of places for eating and drinking.

Other Beaches Close to Lagos

To the east of Lagos is Alvor, which has a similar coastline with beautiful rock formations. It’s separated from Lagos by the Alvor River estuary, which you must drive around, so it actually takes about 30 minutes to reach by car. Alvor is part of the city of Portimão, which has some of the most popular beaches in Algarve, like Praia da Rocha.

The coast to the west of Lagos is much wilder and often nearly deserted, even in the high season. That’s because it can be windy and the waves are better for surfing than for swimming. Still, there are some good family-friendly beaches between Lagos and the westernmost town on the Algarve coast (Sagres, which is also the southwesternmost tip of Europe), such as Burgau, Salema and Martinhal.
Then there’s Algarve’s west coast, known as Costa Vicentina, which has some breathtaking beaches mostly frequented by surfers and naturists.